20. Juli 2017
“The award of UNESCO World Cultural Heritage status for these caves containing the oldest ice age art is fantastic news, and gives momentum to the whole region”, commented State Commissioners Heiner Scheffold (Alb- Donau- Kreis), Thomas Reinhardt (Heidenheim) and Chief Mayor Gunter Czisch (Stadt Ulm) on UNESCO’s recent decision in Krakow. The focus now is to strengthen cooperation with a well-networked presentation of the caves and the locations of ice age art to tourists in the region. “We want to inspire even more people with the ice age art. We are already in the starting blocks”, declared the State commissioners and Head Mayor. A joint advertising campaign is already in the planning stages.
The recognition as a Word Heritage location has been awarded to the caves ‘Hohle Fels’ (Schelklingen/ Alb- Donau-Kreis), ‘Geißenklösterle’ and ‘Sirgenstein” (Blaubeuren/ Alb- Donau-Kreis), all located in the Ach valley, as well as to the caves ‘Höhlen Bockstein’ (Rammingen/Alb-Donau-Kreis), ‘Hohlenstein’ (Asselfingen / Alb- Donau-Kreis) and ‘Vogelherd’ (Niederstotzingen/ Landkreis Heidenheim) located in the Lone valley. They join World Heritage locations such as the Pyramids of Giza, the Great Wall of China, the Inka mountain stronghold, Machu Picchu, in Peru, the Speyer Cathedral, and the old towns of Lübeck and Regensburg.
Items are on display in the Heritage Museum Blaubeuren, the Vogelherd Archaeology Park in Niederstotzingen, and the Ulm Museum, home to the prehistoric ‘Löwenmensch’ (Lion Man) sculpture.
Cultural advances 40,000 years ago at the edge of the Swabian Alps. (Region Alb- Donau- Kreis/Ulm/Heidenheim)
40,000 years ago, where the Swabian Alps approach the foothills of the Alps, a giant leap forward in human evolution occurred. In the Ulm region, in the Alb-Donau and Heidenheim area, ice age humans began to create figurative artworks of animals and humans, and to fabricate the first musical instruments the world has ever seen.
Outstanding finds – presented in the region
The most famous finds can be viewed in the region’s museums. The most famous finds are the ‘Löwenmensch of Hohlenstein’ (Ulm Museum), the ‘Venus of Fels Cave’ (Heritage Museum Blaubeuren), the ‘Vogelherd Mammoth’ (Vogelherd Niederstotzingen), and the ‘Water Bird of Fels Cave’ (Heritage Museum Blaubeuren).
These mammoth ivory sculptures are dated to approx. 40,000 years old, and most measure four to six centimetres, although the sizeable Löwenmensch measures 31 centimetres!
The oldest musical instruments, flutes of bird bone or mammoth ivory, for example the Geisterklösterle ivory flute, can be viewed at the Heritage Museum Blaubeuren. 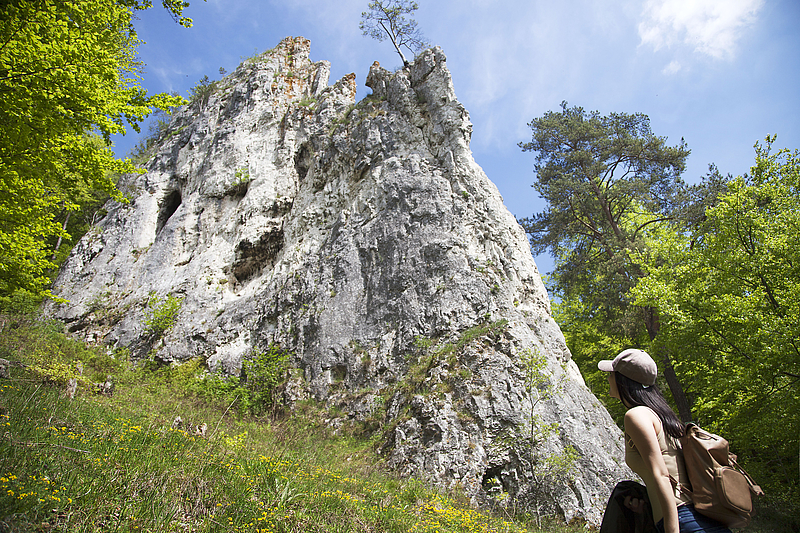