The oldest works of art in the world, international contemporary art and high-quality architecture: For art lovers, the Ulm innovation region is a mecca. Private collections and well-stocked museums are well worth a visit. Baroque churches and monasteries, historic cities, castles and palaces are waiting to be discovered. 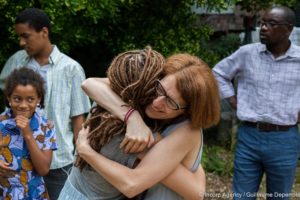 The Ice Age caves in the Ach and Lonetal were declared World Heritage Sites by the 41st UNESCO World Heritage Committee meeting in Kraków in July 2017. The six found caves, Hohle Fels, Geißenklösterle, Sirgenstein, Bockstein, Hohlenstein and Vogelherd are now World Heritage Sites equal to the pyramids of Giza, the Great Wall in China, the Inca mountain fortress Machu Picchu in Peru or in Germany the Speyer cathedral as well as the old towns of Lübeck and Regensburg.

In the heart of the city, in a listed building ensemble from the 16th to 20th centuries. Located in the 19th century, the Ulm Museum presents 40,000 years of art and cultural history with its outstanding collections.

The focus of medieval art is the extensive and outstanding collection of late Gothic painting and sculpture. Well-known masters such as Hans Multscher, Jörg Syrlin, Michel Erhart and Daniel Mauch made Ulm one of the most important art centers in southern Germany in the 15th and early 16th centuries.

With its collection on modern art and the Kurt Fried Collection Foundation, the Ulm Museum presents the most important trends in artistic creation in the USA and Europe in the 20th century, with works such as from Josef Albers, Joseph Beuys, Max Bill, Roy Lichtenstein, Pablo Picasso, Gerhard Richter, Mark Rothko to Andy Warhol.

The highlight of the archaeological collection is the unique lion man, one of the oldest figurative carvings in the world. The mammoth ivory human-animal sculpture was discovered in the Stadel Cave, which was declared a UNESCO World Heritage Site in 2017.

The University of Design, founded in 1953 by Inge Scholl, Otl Aicher and Max Bill, wrote design history until its early end in 1968. To date, the achievements of this institution have been of fundamental importance for the training and work of designers and designers as well as for research. In the Ulm Museum, a presentation offers an insight into the teaching and products of the famous university. The HfG archive itself has been located in the original university building on Hochsträß since 2011. With the permanent exhibition “From the Zero Hour to 1968” and specific special exhibitions, the eventful history of the HfG can be experienced in its authentic setting from its foundation to its end.

The focus is on the Paleolithic settlement in the Ach and Blautal. It is documented by archaeologically valuable finds from the caves around Blaubeuren. The development of humans, their living conditions and their tools are impressively depicted and reconstructed using models. Replicas of ice age art are presented together with works of modern art in the “Gallery 40,000 Years of Art”.

An art and children’s museum with several adventure spaces. The permanent exhibitions include collections on the graphic artist and sculptor Edwin Scharff and his contemporaries, as well as a collection by the painter Ernst-Greitlinger. Special offers are aimed at children and adolescents: there are separate exhibitions and the museum workshop for them.

The Klosterkirche Mariä Himmelfahrt is one of the most important Rococo buildings in Swabia. The monastery, founded in 1126, is operated by Premonstratensians and is now home to a center for family, environment and culture with numerous events. In the monastery museum you can immerse yourself in the baroque world of a venerable imperial monastery with a shiny gold monastery treasure and medicinal relics.

In addition to drama, ballet and music theater, the Theater of Ulm offers numerous concerts. The program also regularly features productions from the independent theater and music scene, which have their permanent place in the podium of the theater.

Small, close to the people, demanding: That is the Herrlingen theater, where theater has been done professionally since 1986. In the meantime, the theater has become a permanent and very popular part of cultural life near the twin city of Ulm / Neu-Ulm.

In the past few years, the nursing home has developed into a cultural center that is well known and respected beyond the region. His profile stands for a selected offer, for good entertainment, for culture with high standards, sometimes off the beaten path.

Tourism in the Ulm innovation region
Ulm, the international city