Development of a new model of gene transcription

Unimagined insights into the timing of genome reading:

Reading out genetic information is one of the most important processes in body cells. If errors occur in the so-called gene transcription and the resulting protein production, cancer as well as metabolic and developmental disorders can arise. In order to develop new drugs or therapies for such diseases, precise knowledge of the molecular processes inside cells is important. Now researchers led by Professor Christof Gebhardt from the Institute for Biophysics at Ulm University have developed a detailed model of gene transcription. The model, which is based on insights into special cell lines with a highly sensitive microscopy technique, is presented in the journal “Nucleic Acids Research”.

In gene regulation, sections of the genetic material (DNA) are switched on and off. This control of gene activity can determine a person’s health and illness or simply their appearance. In the course of so-called protein biosynthesis, such genome segments are transcribed into messenger RNA (mRNA) and finally converted into proteins – these are important building blocks of the body. This process of transferring DNA into RNA is called transcription. At what time and in what amount the protein encoded by the gene is formed is determined by a special genetic material, called a promoter, to which a transcription factor docks and gives the start signal. How the binding and releasing of this transcription factor to the promoter affects gene transcription was the starting question of the Ulm biophysicist. “Although important cell processes depend on certain amounts of protein, gene regulation and thus also transcription have a strong random component: If the gene is activated, a large number of RNA molecules are briefly produced and released in pulses. If it is switched off, however, no RNA production takes place. This means that the amount of protein in genetically identical cells can differ greatly,” explains Professor Christof Gebhardt. The underlying mechanisms were not yet sufficiently known.

In order to gain a deeper understanding of gene transcription and, in particular, its timing, the Ulm biophysicists analyzed key components – namely the search and binding time of the transcription factor on the promoter. For this purpose, they have worked for years to develop special cell lines that contain a reporter gene, a modified transcription factor and auxiliary proteins for concentration regulation and RNA visualization. In these cells, the search and binding time of the transcription factor could be varied in a targeted manner and the resulting transcription of the reporter gene could be reproduced. The researchers used a special, self-made microscope with high sensitivity to make individual molecules in the living cells visible. The variation in the binding time was measured in living cells by means of single molecule fluorescence microscopy. “In order to understand the gene transcription process, we also needed evidence of the RNA produced: This was done using single-molecule imaging in chemically fixed cells, which enabled us to count the transcription pulses. Alternatively, the RNA was made visible directly in the living cells,” explains first author Achim Popp, doctoral student at the Institute for Biophysics. In addition, Johannes Hettich was involved in the study as a co-author.

This regulatory asymmetry, which has been proven for the first time, has enabled the researchers to set up a new model of gene transcription: the binding of a transcription factor does not switch the gene on immediately – further steps must be taken. For each of these transitions, the researchers can now specify probabilities per unit of time, so-called kinetic rates.

For example, they showed that a single transcription factor takes over a year to find a specific binding site on the promoter. Since there are thousands of transcription factors of one type in each cell, the average search time until docking is reduced to around 40 minutes. The new model enables a better understanding of the molecular mechanisms – and in particular the temporal aspects – of gene transcription. Based on this, new therapeutic approaches for metabolic diseases or cancer could one day emerge.

The researchers were supported in particular by the ERC Starting Grant ChromArch from Professor Christof Gebhardt, by the German Research Foundation (SPP 2202, SFB 1279) and the Carl Zeiss Foundation’s young talent program to Achim Popp. Support was also provided by the Center for Translational Imaging – From Molecule to Man (MoMAN) at Ulm University. 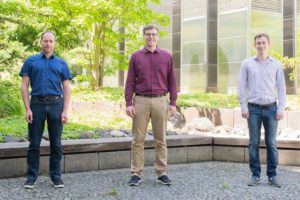 Development of a new model of gene transcription

Unimagined insights into the timing of genome reading: Reading out genetic information is one of the most important processes in body cells. If errors occur