Until now, so-called sand spikes – sedimentary structures in sandstone, such as those found near Biberach an der Riß and Ulm – were considered mysterious but rather unspectacular rock formations. The HNU scientists PD Dr. Elmar Buchner and Dr. Martin Schmieder, together with their Biberach colleague Dr. Volker Sach, have now been able to show for the first time that the formation of sand spikes can be traced back to strong earthquakes – a discovery with great implications for resource – and risk management, because in future these findings can help to better assess the hazard potential of seismic structures and take appropriate precautions. The research results have just been published in the high-ranking journal Nature Communications.

The geoscientists found that sand spikes occur primarily in areas with a high potential for seismic shaking and are formed by a complex interaction of sand, water, carbonate and earthquakes. Buchner, Sach and Schmieder made their initial observations in the northern Alpine foreland basin (“Molasse basin”) around Ravensburg, Biberach, Ulm and Günzburg: the sandstone formations found there have connections to the Ries event, a meteorite impact almost 15 million years ago that left behind the Nördlinger Ries crater area located between the Swabian and Franconian Alb.

Sand spikes as directional earthquake indicators
The orientation of the rock formations is particularly revealing: cone sands, which range in size from a few centimetres to more than a metre, typically have a spherical head on a stem that tapers outwards. In the Northern Alpine Foreland Basin, the stems of most sand spikes are oriented towards the south and thus point in a direction opposite to the Ries crater. The researchers found strikingly similar specimens at Mount Signal in Southern California, USA, not far from the San Andreas Fault – the 1,400 km long fault where the Pacific and North American plates drift past each other. This region is seismically extremely active and is one of the most earthquake-prone regions on earth. There, too, the stems of almost all sand spikes point away from their seismic source.

Buchner, Sach and Schmieder were able to prove that cone sands form during seismic earthquakes with a magnitude well above 7 – presumably 8 or more. The occurrence of these sedimentary structures thus allows clear conclusions to be drawn about how strong past earthquakes must have been in this area. Along the San Andreas Fault, for example, earthquakes just above 7 have been measured so far; but the sand spikes found there show that there must have been severe earthquakes in this area in the recent geological past. The findings are therefore of great interest worldwide for earthquake-prone regions where cone sands occur, such as Italy, France or parts of Australia.

Tool for classifying geohazards
With their research results, the HNU scientists provide a tool that will make it possible in future to assess the hazard potential of seismic structures and, if necessary, to take precautions, for example with regard to building safety standards. With about 20,000 earthquake fatalities per year worldwide, this tool for resource and risk management is of global interest.

The open-access journal Nature Communications publishes high-quality, groundbreaking research from all scientific fields. Published by the Nature Publishing Group, the journal is one of the leading scientific journals worldwide with an impact factor of currently around 15 (8th place in the global Google Scholar ranking across all disciplines). 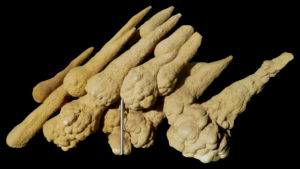 Until now, so-called sand spikes – sedimentary structures in sandstone, such as those found near Biberach an der Riß and Ulm – were considered mysterious