The Centre for Solar Energy and Hydrogen Research Baden-Württemberg (ZSW) is building a new pilot plant for the production of cathode materials for lithium-ion batteries over the next twelve months. The large-scale project is called Powder-Up! and is being built in the Ulm Science Park. The state of Baden-Württemberg is funding the construction work with around ten million euros.

Material batches of up to 100 kilograms can be produced in the new plant. Such quantities are necessary to be able to produce large battery cells for electric cars or stationary storage units at all. In addition, for the first time, the individual production steps for such materials can be further developed in the plant under conditions similar to those in industry. The groundbreaking ceremony for the new building took place on 18 November 2022.

The performance of lithium-ion batteries is almost exclusively determined by the materials used. New, improved materials are initially used only in small quantities in small prototypes. In advanced development phases, however, up to 100 kilograms are required. Industrial manufacturers are reluctant to release such quantities of high-performance materials of current development stages to universities and research institutes, and only under strict secrecy. There is a lack of independent, non-industrial production that goes beyond the typical product quantities of research institutions.

This is exactly where Powder-Up! comes in: With the new pilot plant at ZSW, it is now possible for the first time in Germany to produce battery materials in quantities between ten and 100 kilograms outside the industry. The facilities cover the entire production chain, but also enable research work on individual production steps. The materials produced – with a focus on cathode materials – can then be used in pilot plants at research institutes or by battery producers. It is also planned to put new developments of production machines through their paces under real conditions. This should benefit German mechanical engineering in particular.

“Only industry-proven machines will be used in the four-storey new building to guarantee successful product manufacturing under near-series conditions,” says Prof. Dr. Markus Hölzle, ZSW board member and head of the business unit in Ulm. “The new facilities make it possible to quickly produce different product samples and thus save a lot of development time. By means of digitalised process steps including the associated product analytics, we provide the basis for continuously improving resource use, product yield and the performance of batteries.” The pilot plant will be commissioned from December 2023.

The Ministry of Economics, Labour and Housing is funding the ‘PowderUp!’ cathode pilot plant with 10 million euros. The state funding will be used to create the structural and infrastructural requirements. A new four-storey building with around 1,500 square metres of floor space will be constructed to house the project.

The machines and equipment for the pilot plant are being financed by the Federal Ministry of Education and Research (BMBF). The ZSW already received a binding funding commitment of around 20 million euros for this in November 2021.

Powder-Up! will create the necessary conditions for Germany to be able to hold its own in the long term as a business location for battery development – especially against Asian competitors. The large-scale laboratory at the Ulm Science Park is a unique selling point in battery research throughout Germany.

The scientists at the ZSW have been researching functional materials for batteries and supercapacitors for over 30 years and are very familiar with the development and processing of customised powders and pastes up to the battery cell. The focus is on translating scientific findings into products that are developed to market maturity with partners from industry. The equipment already includes Europe’s largest research platform for the industrial production of large lithium-ion cells as well as a battery safety and test centre.

The Centre for Solar Energy and Hydrogen Research Baden-Württemberg (ZSW) is one of the leading institutes for applied research in the fields of photovoltaics, renewable fuels, battery technology and fuel cells as well as energy system analysis. Around 330 scientists, engineers and technicians are currently employed at the three ZSW locations in Stuttgart, Ulm and Widderstall. In addition, there are 100 scientific and student assistants. The ZSW is a member of the Innovationsallianz Baden-Württemberg (innBW), an association of 12 non-university, industry-related research institutes. 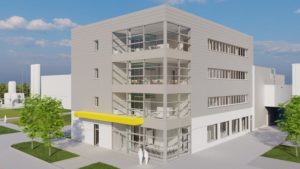